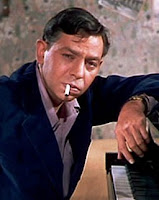 Our RTV affiliate in Atlanta—WSB-DT—recently halved their 10:00am showings of The Jack Benny Program to allow for reruns of The Rifleman (Benny follows Chuck Connors and Johnny Crawford at 10:30), and while I don’t get to check in as much as I would like, I caught an old November 30, 1958 telecast the other day that featured as guest composer/savage wit Oscar Levant. 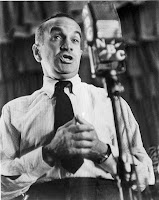 I’m a huge fan of Levant’s, particularly through his OTR showcases as one of the rotating panelists on the erudite “game show” Information Please, and later as sidekick to Al Jolson on The Kraft Music Hall from 1947 to 1949. I’ve had many a friend remark that my biting sarcasm is similar to Oscar’s, though I can’t imagine how they came to that conclusion.

Anyway, Levant is Jack’s guest and he’s been warned by announcer Don Wilson that Benny has been out of sorts of late (Benny’s absence from the scene is explained by his having stormed off the set), and Oscar has a nice joke when he refers to Don’s boss as “The Magic Violin” (probably a reference to “Evelyn and Her Magic Violin,” featured on Phil Spiltany’s radio program, The Hour of Charm), explaining “I didn’t mean that as a compliment. I only say ‘magic violin’ because when he plays it, everyone disappears.”

DON: Well, Oscar—in answer to your question I’ve been working for Jack for…well, better than twenty years, and it swells my chest with pride to think that a man of Jack’s great talent and dynamic personality would want me as a member of his cast…
OSCAR: Spoken like a man who hasn’t saved a dime… 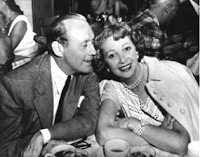 Jack returns to the set and gets more and more irritable, particularly at Don’s introduction (“Ladies and gentlemen—it is my pleasure to bring you a man who was great in vaudeville…great in motion pictures…great in radio, and now is great in television…as a matter of fact, he has grated on more people than anyone in America”); he fires Don and then it’s Wilson’s turn to storm off. This provides the impetus for Levant to play a piano solo, after which he is joined by Mary Livingstone:

OSCAR: …a lot of things could be bothering him…tell me, Mary—does he have any problems with money?
MARY: Only keeping his stacks even…
OSCAR: That figures…maybe his age is catching up with him…
MARY: Oscar, his age couldn’t catch up with him if Willie Shoemaker were riding it…
Things begin to deteriorate further after that, with Jack blowing up at his director, Don Weis (played by…um, director Don Weis) until Oscar finally makes the suggestion that Jack come with him to make an appointment with his doctor:

JACK: What do you know about doctors?
OSCAR: What do I know about doctors? Why, if I ever stopped going to doctors they’d have to close two medical schools…
Jack reluctantly makes the trip with Oscar (in his “Jaguar ambulance”) and both men are told that they’ll have to wait to see the doctor, who’s with another patient. As they pass the time in the waiting room, Jack reveals that he’s going to be making a trip to New York soon to sign a new contract, and that sometimes he experiences a little anxiety beforehand. It seems the last time he had to go to the Big Apple, he took Mary out to dinner the night before to celebrate and when it came time to order, he encountered an oh-so-familiar waiter:

JACK: Oh, waiter…waiter…
FRANK: Yesssssss???JACK: We’d like to order, please…
FRANK: Very well… (He hands them both menus)
JACK: What are you going to have, Mary?
MARY: I don’t know…I think I’ll just have a Caesar salad…and some coffee, please…
FRANK: Yes, ma’am… (He starts to leave)
JACK: Wait a minute…you didn’t take my order…
FRANK: I will in a minute…first I’m going to get you a finger bowl…
JACK: A finger bowl?
FRANK: You’re not going to eat with those dirty hands…
JACK: My hands aren’t dirty!
MARY: Jack, order something…
JACK: All right…let’s see…I believe I’ll have some oysters…
FRANK: Yes, sir…a half-dozen or a dozen?
JACK: A dozen…
FRANK: Fried or on the half-shell?
JACK: On the half-shell…
FRANK: Blue Points or Olympias?
JACK: Blue Points…
FRANK: Male or female?
JACK (after a pause): How can you tell whether an oyster is male or female?
FRANK: We look at their drivers’ licenses…I just knew you’d ask!

Up until the point where Oscar and Jack arrive at the doctor’s, I thought: “Hey…I don’t think I’ve ever seen this one”—but the exchange between Benny and Nelson brought it all back to me, and it’s revealed (of course) that Jack’s irritability is caused by the fact that he just knows he’s going to run into Frank during his trip, and there are several other flashbacks shown, with Nelson as a haberdasher and train ticket agent (when Jack informs him he’s going to New York, Nelson snaps: “Good! Now if we could just get rid of this smog…”), and then a hilarious montage with Frank in various occupations (photographer, hot dog vendor, gas station attendant, etc.). The kicker comes at the end when the doctor (Olan Soulé!) announces he’ll see Jack now and the patient he’s been seeing is none other than Nelson—who goes nuts at the sight of Jack, and begins to climb a trellis in the physician’s office. Oscar and Jack depart, with Jack truly a happy camper: “I’m even with that guy…I’m even with him!”
Posted by Rere at 7:48 AM No comments: 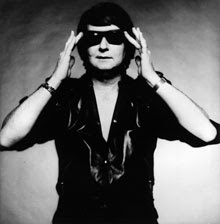 LOS ANGELES (AP) — Late rock 'n' roll pioneer Roy Orbison has been honored with a star on the Hollywood Walk of Fame.

Orbison's widow Barbara accepted the star in front of the Capitol Records building on his behalf on Friday. Orbison died in 1988 at the age of 52, in the midst of a comeback with The Traveling Wilburys, a whimsical supergroup that included Bob Dylan, George Harrison, Tom Petty and Jeff Lynne.

Orbison was famous for the wide range of his distinctive and emotional voice, especially in his songs about unrequited love like "Only the Lonely," "Crying," "In Dreams" and "Oh, Pretty Woman."

Actor Dan Aykroyd says Orbison was a great balladeer and a great rock 'n' roller who could be both gentle and vicious.
Just running scared, each place we go.
So afraid that he might show.
Yeah, running scared, what would I do
If he came back, and wanted you?

Then, all at once, he was standing there.
So sure of himself, his head in the air.
My heart was breaking. Which one would it be?
You turned around and walked away with me.
From my mother: “I’ve heard that song close to a million times…and yet, I still get that chill of surprise when the woman chooses Roy at the end.”
Posted by Rere at 7:47 AM No comments: